Quantitative Conductivity Mapping (QCM) is a non-invasive technique that calculates the high-frequency tissue electrical conductivity (σ) from the phase (φ0) of the MRI signal1. QCM has a range of potential clinical applications including measuring sodium levels2, and distinguishing between different types of brain glioma3.

Most QCM methods are based on the following differential equation1, valid in regions with slowly varying σ:

where μ0 is the vacuum permeability, ω is the proton Larmor frequency, and ∇2 is the Laplacian operator. Applying a finite-difference approximation of ∇2 severely amplifies the noise4 (Figure 1a), which is why most current methods fit a 3D quadratic function within a kernel (Figure 1b) around each voxel and calculate the Laplacian of these fitted functions5,6. This 3D quadratic fit is usually either i) weighted by the magnitude values within the kernel5 (Figure 1c) or ii) restricted to voxels from the same tissue type7 (Figure 1d) to avoid artifacts at the conductivity boundaries where Eq. 1 is not applicable.

While these are the most commonly used methods for QCM, there is a lack of readily available implementations that could be used as a standard. Here, we have implemented a MATLAB function that performs QCM by quadratic fitting within an ellipsoidal kernel of user-defined dimensions and with options for i) magnitude- or ii) segmentation-based edge preservation. Moreover, i) and ii) can be used in combination (Figure 1e), which is a new approach that shows promise for outperforming all the other techniques (Figure 1).

Eq. 1 can also be formulated as a surface integral8 that has previously been suggested to be more noise-robust than the differential form9:

where S is a closed surface of some kernel with volume V. To solve this equation, only the first derivatives of φ0 need to be calculated which induces less noise amplification then estimating the Laplacian. ∇φ0 can be calculated using the 3D quadratic fitting approach described above. Since Eq. 2 is also not valid at the conductivity boundaries, i) magnitude-, and/or ii) segmentation-based restrictions can be applied to both kernels (one for calculating ∇ and another one for calculating the surface integral).

Though we have recently shown that the integral-based methods are more accurate than the differential-based approaches (Figure 1), very few studies have previously applied these (using small kernels only without i) or ii)) possibly because the surface integral is tricky to implement. Here, we have implemented a MATLAB function that performs QCM by solving Eq. 2 with options for i), ii), or i) and ii) combined. These methods are all entirely new.

By disseminating this software, we hope to accelerate QCM research and its translation into a wide range of clinical applications. 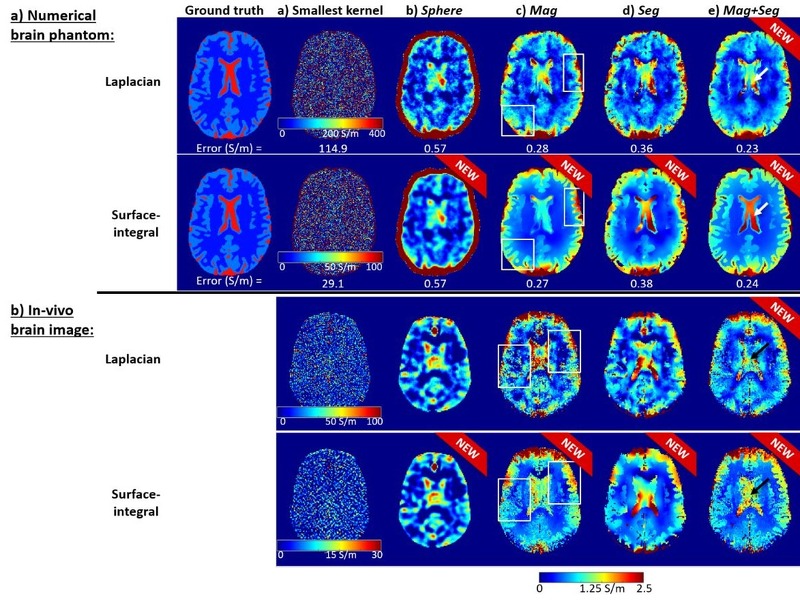